Recently while going through some old notes of mine, I came across some jottings I had made while I made my visits to Car Nicobar island  nearly two and half decades back. These make interesting reading and one can realize that perhaps Subhas Bose was very naive man who could not distinguish between bad and good and bad and evil. 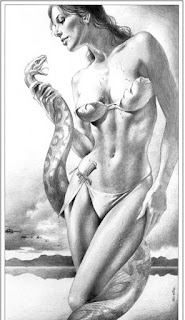 The Car Nicobar Island houses a Air Force base and my purpose was basically to evaluate the Security  aspects of this base. The Island itself is beautiful  with lovely beaches. It has a perimeter road about 50 km in length, that circumference the island. I have driven on this road. During my visits and interacting with the head man a startling fact emerged.

The Japanese occupied the island in 1942, but they did not hand over the administration to the Indian nationalists. They continued to pay lip service to the cause of Indian independence and fooled Subhas Bose, who turned out to be naïve or plainly stupid.

As per the accounts related to me the soldiers of the Imperial army greatly desired the local tribal girls who were good looking. They wished to incorporate the young girls as comfort women for their troops with the more beautiful ones being reserved for the officers. This was resisted by the locals. The Japanese then did the unthinkable and started a massacre of the male population. In particular they targeted the educated elite who spoke English and just either beheaded them or shot them.

The Japanese followed up by claiming the women for their pleasure and after repeated rapes and sex, hundreds were impregnated. The Japanese gloated on their power over the women as they repeatedly raped and impregnated them. The head man shuddered at the thought and I also felt revulsion of the Japanese.They, thus to an extant changed the race of the Island.

This aspect of the Japanese occupation of the Car Nicobar Island need further study. Historians have some how ignored this area which was occupied by the Japanese. The Japanese account of the occupation makes me sad, worse I fell sadder that Subhas Bose sided with the Japanese.That is an irony of History