Omarosa Manigault-Newman is an American reality television show participant. She is a former political aide to the president but better known as one of the contestants in the reality show "The Apprentice". Omarosa has been accused by the White House of having broken her secrecy agreement by making certain bits of news.  Fox News has now reported that the issue is not dying away though many days have elapsed and it has erupted on Twitter and other social media sites with both taking swipes at each other. An acrimonious debate has commenced on Twitter.

Trump is campaigning to silence the lady but she has declared that she will not keep quiet and won't be silenced. She told AP in an interview that she will definitely tell her story and will not be intimidated. However, she does appear to be a bit rattled as she has declined to answer any questions about her stay as an aide to the president, citing the secrecy clause. The lady is strong-willed and despite the statement by the White House on the secrecy clause has continued her tirade against Trump. Time reported that she even went to the extent of stating that he is "unfit" to be the president. This is not all and the New York Times reported that Trump has hit back by referring to Omarosa as a "dog".

It's a battle royale and who will win ?
Posted by Madan G Singh at 5:14 AM No comments: 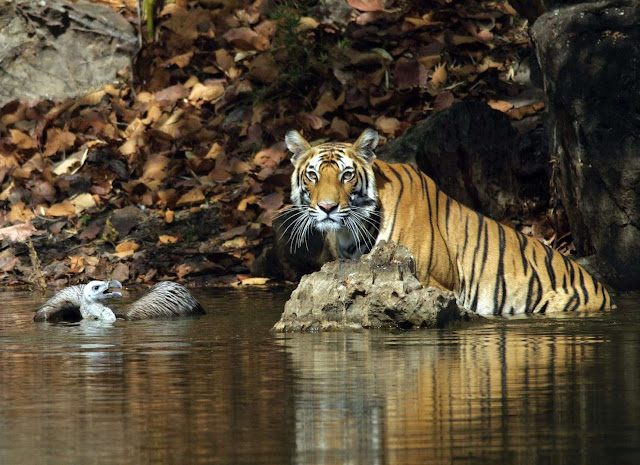 A wildlife sanctuary and nature reserve in central India has the highest concentration of Bengal tigers on Earth. Indeed, about 50 of the fierce felines roam Bandhavgarh National Park, and a jeep safari is an ideal way to catch a glimpse of them. (I will not suggest just strolling around through the forests here, for obvious reasons.) The park gets its name from an ancient fort seated at the top of a small hill in the center of the reserve. The Tigers are the star attraction here, but if you visit, keep an eye out for leopards, sloth bears, wild boars, and the remarkable grey Langurs- made memorable from the days of the Ramayana.
Posted by Madan G Singh at 12:38 AM No comments: